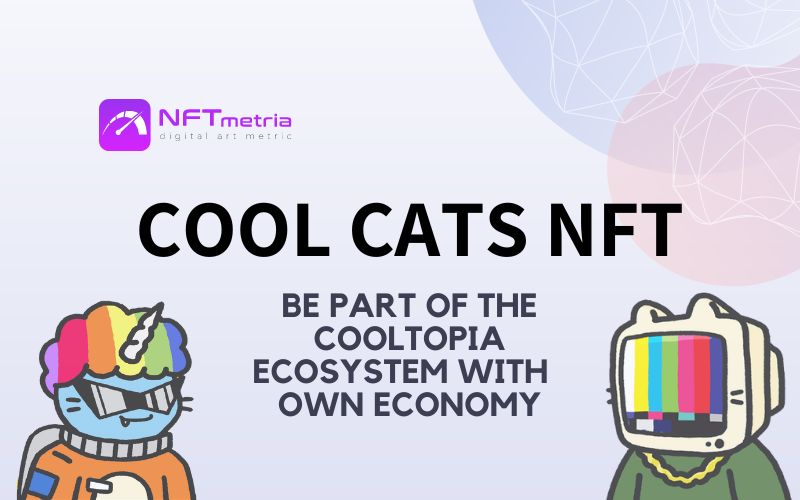 Have you heard about the Cool Cats NFT collection? You might be thinking, “Another NFT series? What’s so special about them?” But these NFTs are more than an art project. Owning one of them allows you to do a lot of things. Your Cool Cats can go on adventures, complete quests, build houses, go into battle. And in the future, you will be able to cross and breed them, as in the CryptoKitties project, which once blew up the market with this particular function.

Due to the fantastic initial response, the creators of collection want to move from simple NFTs to a community driven project. The goal of the team behind this is to create a gamified ecosystem called Cooltopia.

What are Cool Cats NFT?

The aesthetic simplicity of pictures stands out from the hyper-detailed visuals of some other collections. The collection is designed simply, reminiscent of Saturday morning cartoons. Nothing more than a cartoonish head and shoulders, perhaps it is this nostalgic simplicity that contributes most to the collection’s popularity.

How Cool is your Cat?

There are several levels that Cool Cats can take. Each level has a different number of NFTs as well as points.

Apart from these levels, rarity is also determined by specific traits or combinations. For example, a Cool Cat dressed as a robot or a skeleton is less common than others dressed in a plain shirt.

Who created the Cool Cats NFT?

The Cool Cats project is run by four main contributors, each with a specific role:

The team is passionate about crypto, art, and making cool stuff. Moreover, from a young age, Colin always drew cartoon characters. In high school, Colin loves to draw cats and he drew Blue Cat. All cats in the collection are descended from this blue cat.

It was the celebrity involvement and ownership of these NFTs that made the project so popular in the first place.

#tbt when my @coolcatsnft was on a gigantic billboard in the middle of Times Square lmfao pic.twitter.com/Pv8vKAgoOe

Why are Cool Cats NFTs so popular and expensive?

There are several reasons for their popularity, and, accordingly, their cost:

What to do with Cool Cats NFT?

While Cooltopia is still under development, here are a few things you can do with your Cool Cat right now:

According to the project roadmap published in July 2022, Cool Cats plans to:

Unfortunately, there are practically no comments on the roadmap from the creators. Therefore, we will closely monitor the news and notify you.

The ecosystem of the project called Cooltopia is now in its infancy and promises to be very large-scale. To date, a derivative collection of Cool Pets and an internal $MILK token have been implemented.

And there are still various drops ahead, a metaverse, a second generation with the possibility of breeding (similar to CryptoKitties), a full-fledged working economy of the project.

Cool Pets is a derived collection. It was minted on February 1, 2022 and includes 19,999 NFTs. 10,000 of them went free to Cool Cats holders, while the other half was publicly sold.

Initially, this is a token in the form of an egg, from which one of 4 types of pets hatch in accordance with the natural element: grass, fire, water or air. The food and items given to the egg determine the appearance and element of the creature. Users can develop and upgrade their pets, but this feature will open on a large scale only in the future.

$MILK is an ERC-20 social token in the Cool Cats ecosystem based on the Ethereum and Polygon blockchains. $MILK is needed for a wide variety of things, including purchasing pet chests, battle chests, housing chests, completing quests, and future gamification.

Users have ways to earn and spend $MILK, and the token can be used for activities throughout Cooltopia.

The activity is divided into two separate parts:

The announcement of $MILK also led to a new trend in the community: the milk sip. Community members and developers have started posting videos of themselves drinking from a small glass to a full gallon of milk.

The Cool Shop is an in-game market where you can sell items and buy consumables using $MILK. Here, owners can easily monetize or expand their collections. The marketplace allows buyers to buy, sell, and trade items.

After a long wait, Cooltopia was launched in mid-April 2022.

Cooltopia is a Cool Cats ecosystem that includes all Cool Cats components that interact with each other:

In Cooltopia, owners of NFT will be able to complete tasks to earn $MILK.

The goal is to create the most accessible gamified NFT experience; be a place where having Cool Cats NFT provides you with evolving access to games, tokens, community events, collaborations and more.The creators of the project told about the plans of Cooltopia

On September 2, 2022, the team of creators announced the launch of unique comics in the ERC-721 standard on Ethereum for NFT holders.

The first series of Comics begins with The CATaclysm, which consists of four parts. From him, the storylines that will come together in the following series will begin and will cover events from all over Cooltopia. The images in this series are based on the Blue Cat, a character created by the author. The story is set in a world where cats are reimagined as humans with animal traits such as whiskers, tails and ears.

Each comic has a fixed maximum number of editions, so they are available on a first come, first served basis. Also, the animated comic will be constantly broadcast on the official Youtube channel.

In addition, each owner:

How much do Cool Cats NFTs cost?

Initially, on July 1, 2021, NFTs were sold at a price of 0.06 ETH. Then they bought only 300 pieces. Then the creators reduced the price to 0.02 ETH, and as a result, all the tokens were sold out in 8 hours. Now, of course, the price is completely different.

Where to buy Cool Cats NFT?

Currently, Cool Cats can only be purchased from secondary markets such as OpenSea, Rarible, Coinbase, Looksrare, X2Y2 and more.

How to buy Cool Cats NFT?

Latest news about the project

This extensive review would be incomplete if we did not touch on important news about the project itself. So, below are the largest of them.

A 3D version of the Cool Cat NFT appeared on March 18, 2022 in a trailer for the Otherside metaverse by Yuga Labs.

The next day, the project saw an inevitable surge in sales, reaching 199 sales on OpenSea. The fact is that at that time there were suggestions that the presence of Cool Cats would give Otherdeed free land in the form of an airdrop. But then it turned out that Cats owners would not receive any immediate financial benefits or early access to the Otherside game.

Despite this, the presence of these NFTs in the new metaverse provides undeniable advantages over other collections. Namely, they will be transformed into 3D models ready to be used as playable characters using the ODK (Open Data Kit). There is no further information yet as the metaverse is still in testing and early limited launches.

In August 2021, the Cool Cats team announced a huge collaboration with Time of the Year magazine. For this collaboration, they minted 400 NFTs of famous characters reading Time magazine. These are four different cats with different designs that belong to the creators of the collection.

To get one of these Cool Cats X Time NFTs, you had to enter a meme contest run by Time Magazine and 392 of these NFTs were reserved exclusively for Cool Cats owners.

The collaboration came about because the Cool Cats community exudes positivity and optimism, as well as being family-friendly and able to communicate across generations.Time president Keith Grossman tweeted

Signing a contract with CAA

In March 2022, the creators of Cool Cats signed a contract with CAA (Creative Artists Agency). It is the leading Hollywood talent agency based in Los Angeles, California.

The agency will identify and create opportunities for Cool Cats characters across a wide range of areas, including licensing and merchandising, animated content, brand partnerships, live events, publishing and more.It was said in a press release

In April 2022, a new collaboration between Cool Cats and Toikido became known. They announced a deal to manufacture and distribute a wide range of merchandise, including plush toys, branded merch and other branded merchandise.

In addition to traditional in-store and online distribution, Toikido will work with Cool Cats to create exclusive drops for the community as well as special events.

In October 2022, the project team announced that it had received a strategic investment from Animoca Brands. The partnership will help Cool Cats continue to grow as a successful NFT brand and media company. In addition to this investment, the team also announced their partnership with GAMEE in September.

GAMEE is a subsidiary of Animoca and specializes in virtual casual game spaces. Through this partnership, NFT owners will have access to exclusive NFT drops, sweepstakes and gifts.

The future of the project

Having accomplished its original goals, it looks like a new era is dawning on the horizon of the project. The team has already published a list of future additions for their game and released a new roadmap including:

People’s perception of Cool Cats right now exists solely as an NFT, but it’s really just our launch platform for the brand as a whole, so we intend to use it in almost every possible way. Co-Founder Luza told The Hollywood Reporter

Should you invest in Cool Cats NFT?

Now is a good time to invest in Cool Cat NFT. The fact is that the ecosystem of the project is now actively expanding. And not everyone knows in such detail all the prospects that the creators promise to realize. And they implement them in every possible way, especially having received investments from the industry giant Animoca Brands.

So, you can expect richer, more fun and interesting experiences as a valued member of the Cool Cats community. Indeed, with so many exciting plans in the works, you can expect this NFTs to maintain their visibility and liquidity, and the investment will actually carry a lot of X’s.

But in any case, do your own in-depth analysis and research when investing in NFTs, and then make your own decisions.

Cool Cats NFT is a promising project based on the active participation of the community.

The cool pet drop mechanic and the gamified experience the team has created is a testament to their vision and commitment. Without a doubt, they will continue to move forward, pushing the boundaries. There are many collaborations, the art is cute and interesting. Cats have taken the web3 world by storm and there is no doubt that this is the most recognizable and original collection of NFT cats. 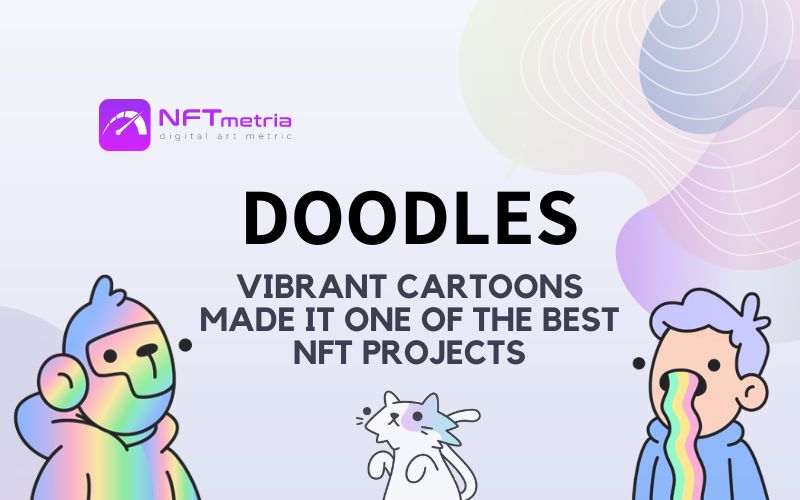 Doodles: a detailed overview of the top cartoon NFTs and their ecosystem 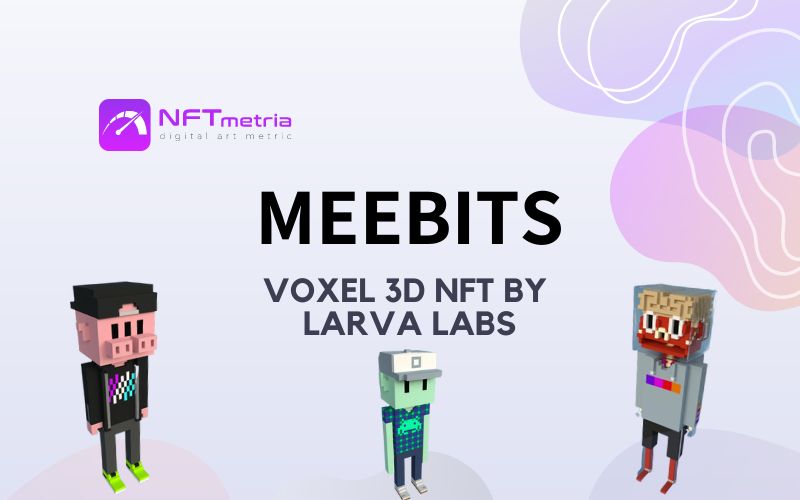 Meebits: Overview of Metaverse-Ready 3D NFTs from the Larva Labs 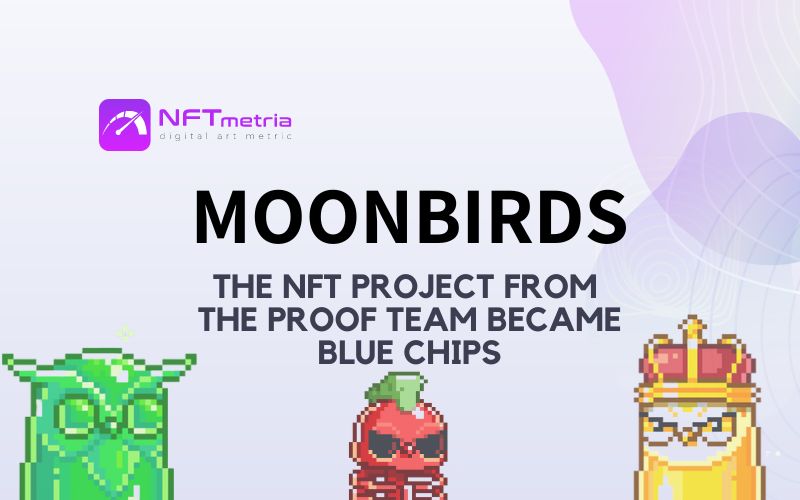 Moonbirds: NFT project of Kevin Rose in the bear market broke all records