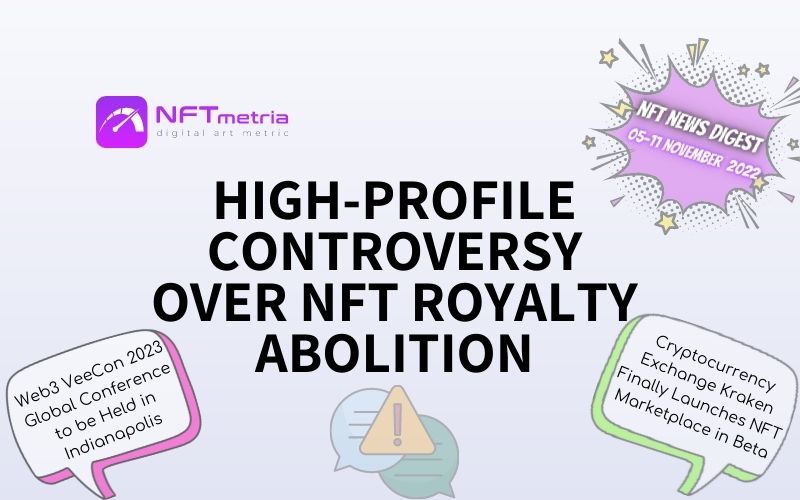 In addition to the news that the NFT market has been divided in a high-profile debate over the abolition of royalties to NFT creators, in today’s NFT news digest for the past week of Nov. 5-11, you’ll find:

Recently, the NFT market has been shaken by new discussions about the principles and mechanisms of the industry. Today, we can observe one of the most high-profile disputes that erupted due to the abolition of mandatory royalties (commission to NFT creators) in order to reduce the cost of NFT and, accordingly, support the user audience of marketplaces.

What started the dispute over royalties to the creators of the NFT?

On November 6, the largest NFT marketplace OpenSea posted a post on its blog, which stirred up the entire NFT market and caused loud discussions and disputes.

The matter is that OpenSea has decided to cancel obligatory royalties which were paid to creators at each resale of their creativity. While OpenSea has said it will give creators the power to determine whether traders must pay royalties, the enforcement tool announced Nov. 6 only applies to new collections of NFTs. And from already hosted collections, OpenSea, in fact, removes royalties. That is, leaving this decision to the buyers, who can voluntarily make deductions upon purchase.

In a blog post on its website on November 6, OpenSea stated that the reason for the decision to initially introduce NFT royalties was to motivate creators to host their collections on their platform. Thus, securing a competitive advantage.

With OpenSea now firmly in the lead in terms of sales volume and market share, the decision has been made to shift its focus to customer value.

How did major players in the NFT market react to the abolition of royalties to NFT creators?

In response to such a loud statement, many major market players spoke out. Starting from other NFT marketplaces, ending with the creators of large collections and artists.

So, one of the loudest condemning responses in the form of an open letter was made by the co-founder of Yuga Labs, Wylie Aronow (Gordon Goner).

The letter, which is signed by the other Yuga Labs co-founders, aims to keep creator royalties and NFT transfers between wallets free (unless it’s a purchase), while keeping creators motivated within the ecosystem.

Some thoughts on creator royaltieshttps://t.co/hKB5eQKZ93

For many artists and creators, royalties have been the single most important factor that brought them into the ecosystem. <…> The end result was that OpenSea made about $35 million in sales of Bored Ape on its platform, not counting our other collections. We never met the founders, but maybe they have a beach house somewhere with a sign for us. Ironically written by Wylie Aronow in a letter

great work @GordonGoner !! i think this could be a great path forward to protect these royalties 💪💪💪

though i still think even if this is implemented the switch from sellers FEE to buyer's PREMIUM is long overdue and will help a lot with compliance. 🙏🙏🙏 https://t.co/wdIXYo5yp8

This is the way. https://t.co/roN4OCanmI

1/ Royalties for NFT creators are essential to a decentralized & democratic ecosystem, ensuring fair distribution of value to contributors/creators, which in turn supports value creation across all #NFT commons. Royalties are a critical part of the #web3 #ethos https://t.co/J64WiAqqqn

Thus, the major players of the NFT market united, protecting their rights, interests and earnings, supporting the idea of ​​setting up smart contracts to block all transactions that will be carried out through marketplaces with zero commission. Thus, putting trading platforms in a difficult position. In fact, all major players can deprive marketplaces of traffic, sales volumes and user audience in this way.

For three days, there was a loud debate on Twitter about the abolition of royalties. As a result, on November 9, OpenSea accepted this criticism and updated its post on the official website.

OpenSea will continue to charge creator fees for all existing collections. So says the official statement of OpenSea, which will lead to a big victory for artists working in the digital space.

In recent events, Magic Eden, X2Y2, Blur and LooksRare marketplaces have taken the path of partially eliminating royalties, leaving this choice to buyers. Meanwhile, OpenSea, Rarible, Nifty Gateway, and Immutable X will continue to pay royalties and comply with the terms and conditions set by the creators.

The NFTMetria team will continue to closely monitor all aspects of this contentious discussion. And this topic is really ambiguous. Marketplaces see a decrease in user activity and, accordingly, sales volumes. This directly affects the commission earnings of the sites themselves. And with this step, each marketplace could increase its own attractiveness in the eyes of buyers, reducing the cost of purchase.

But, on the other hand, without royalty, many artists working in the industry would no longer receive fair compensation for their work. This ensures a fair distribution of value among contributors and creators. Which, in turn, supports the creation of value in all of the NFT’s shared resources.

This begs the question, what will happen to the market if NFTs are no longer profitable for those who produce them?

Since the beginning of 2021, the Kraken cryptocurrency exchange has been conducting large-scale work to expand its business towards NFT, namely, it has been developing its own NFT marketplace.

Finally, Kraken announced the launch of a beta trading platform for a limited number of people.

💌 Check your email to see if you received a Beta invite or head to our blog to learn more: https://t.co/cAf5I7vLRb pic.twitter.com/vFxmPXHX6m

One of the largest cryptocurrency exchanges followed the path of its competitors, such as Binance NFT, CoinBase NFT, which successfully implemented their own marketplace in the NFT market.

Back in May 2022, Kraken announced the launch of the platform with no exact dates and invited users to register on a waitlist for the new platform. Now it is these users who get access to the trading platform in the beta testing format. However, the firm has indicated that the new platform will soon go public.

The site administration also announced some competitive features of the new NFT marketplace.

What will we see there?

What is the Kraken cryptocurrency exchange?

Kraken is a US-based cryptocurrency exchange. It was founded in 2011 amid multiple hacks of the then-leading crypto exchange Mt. Gox, whose constant attacks led to huge losses in user assets and, subsequently, its collapse. The founder of Kraken, Jesse Powell, took as the main idea to ensure the absolute safety of the assets of the users of the exchange.

In numbers about the crypto exchange:

Web3 VeeCon 2023 Global Conference to be Held in Indianapolis

NFT influencer, creator of Veefriends Gary Vaynerchuk (Gary Vee) has announced that VeeCon 2023 will be held in Indianapolis, Indiana from May 18-20, 2023, the largest and largest NFT conference of its kind, bringing together prominent leaders’ business, web3 and pop culture. As of now, it is known that the conference will be held at Lucas Oil Stadium and at the TCU Amphitheater in White River State Park.

This will be the second conference. VeeCon 2022 was hugely successful and featured several highlights and keynote speakers. Among them were Pharrell Williams, Snoop Dogg, Logan Paul and others. In total, the event was attended by thousands of participants and spectators.

VeeCon will provide attendees with a fantastic lineup of speakers from the world’s biggest industries. Key players and icons from business, music, art, web3, sports and pop culture will take the stage and offer their knowledge at the event.

There will be keynotes, innovative and educational talks, panels, interviews and world-class entertainment. This web3 community event allows attendees to meet like-minded people in a great, vibrant space.

We are going to make it bigger and cooler than in 2022. And I can’t wait to see all of you and all VeeFriends at Indy, VeeCon 2023. Gary Vee said in his video message

How to get to the VeeCon 2023 conference?

VeeCon 2023 will be accessible through tickets that will be issued in early 2023 to all VeeFriends Series 1 NFT holders. This was the same practice that year. Thus, we can see the real utility from owning NFT data, which, accordingly, increases its value.

How did the news of VeeCon 2023 affect VeeFriends sales?

Following the news, VeeFriends Series 1 sales jumped 280% in weekly sales. And the floor price was able to rise from 5.25 ETH to 6.11 ETH. To date, the minimum price is 5.75 ETH, which is also not a low indicator. And the closer a large-scale event is, the more likely the price will rise. 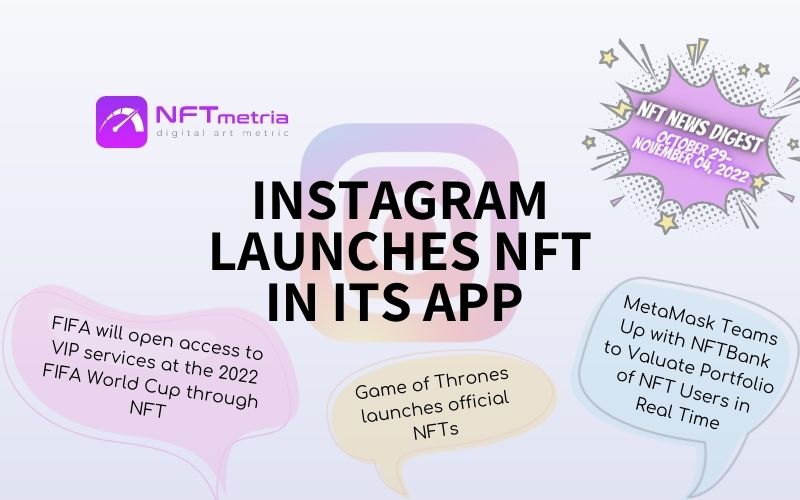