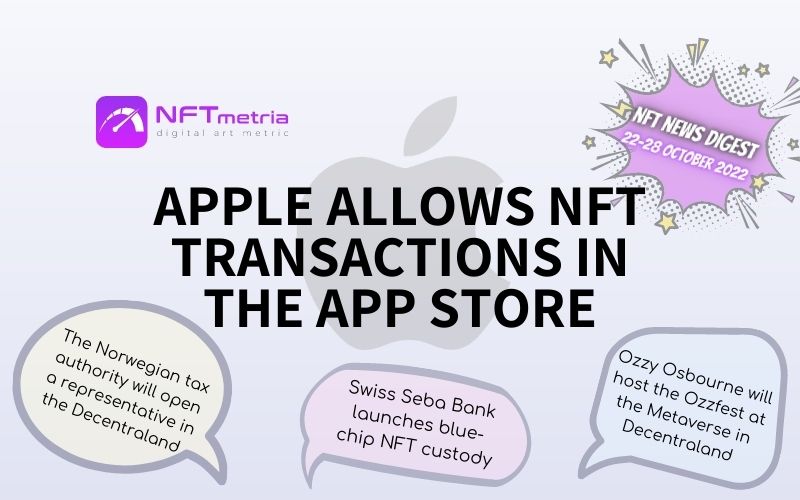 In addition to the news that Apple has allowed NFT transactions in the App Store, but with strict conditions, in today’s news digest for the past week from October 22-28 you will find:

Apple allows NFT transactions in the App Store, but with strict conditions

On October 24, 2022, Apple released updates to the App Store Review Guide. Finally, after much discussion and anticipation, Apple’s position on the NFT is clear.

Let’s take a look at how NFT transactions will now be available in the App Store:

How will the Apple updates affect the NFT market?

Apple’s fundamental step in relation to the digital asset market has been expected by the public for a long time. And finally, the tech giant Apple accepted a new area, but not forgetting about its own interests, namely, a commission that is crazy by the standards of the market in the amount of 30% of the transaction amount.

Now all major players will have to adapt to the new conditions in the hope of a significant increase in the target paying audience thanks to the huge App Store market. Violation of such policies may result in application being rejected or removed.

The regulated entity announced on Wednesday the launch of a new institutional-grade NFT custodial service. The new custodial service will offer verified and certified hot and cold storage that will allow the bank’s institutional clients to store high-value and valuable NFTs without having to manage their own private keys.

These are NFT collections known as blue chips, very popular and often very expensive collection series such as Bored Ape Yacht Club, CryptoPunks and Clone X among others. All of them are included in the Top of the best NFT collections.

SEBA Bank is proud to be the first regulated bank to offer custody of NFTs and we believe that in the coming years digital assets, including NFTs, will gain acceptance and become increasingly acceptable even to traditional financial operators.A bank spokesman said in an official press release

How is Seba Bank developing in the NFT world?

While the digital collectibles market has cooled in recent months amid a broader downturn in the cryptocurrency market, the bank said the new launch is in response to growing demand from customers who are looking for a secure service and who are trusted to store their NFTs.

Many investors who held NFTs remained in the market, showing confidence despite the market downturn. Commented a bank spokesman.

In addition to holding NFTs, the bank is also reportedly considering expanding its services in this sector. Urs Bernegger, co-director of markets and investment solutions at SEBA Bank, announced that the organization is looking into the possibility of clients using their NFTs as collateral for traditional financial services such as loans, for example.

Speaking about the benefits of institutional custody, Bernegger said that these are just some of the features that SEBA Bank is considering for possible implementation in the future. According to this source, the bank already supports various services such as investment, loan and lending for cryptocurrencies, which it can extend to NFTs.

We could create a collectors’ club and help them find other collectors, for example, instead of going to the market. There are things we have in mind, but in the beginning, we basically laid the groundwork: secure storage of NFTs. Told Urs Bernegger, co-director for markets and investment solutions at SEBA Bank.

The Norwegian state agency Brønnøysund Register Center, which is responsible for managing state registers, is opening its own virtual office of the tax authority of the country Skatteetaten in the Decentraland metaverse in partnership with the British accounting firm Ernst & Young (EY).

EY Head of Innovation Magnus Jones said that more government agencies see a clear need to be present on platforms that are mostly used by young people. This, says Jones, is in line with both the tax and legal goals of government agencies.

What can be done in the Skatteetaten virtual office in Decentraland?

In the virtual office, users will be able to get information about cryptocurrency reporting with the help of the Norwegian Tax Agency, as well as how to create their own legal entity. It is the new generation that will drive the current DeFi-based industry, Jones said, and often the same young people are unaware of the tax or legal nuances that will lie in wait along the way. Therefore, the Norwegian government is going to tell young people how to properly register a company or report on income from digital assets.

In this way, Brønnøusund and Skatteetaten seek to provide tax services to tech-savvy individuals and, at the same time, start public activity in Web3.

Rock singer and Black Sabbath member Ozzy Osbourne is taking Ozzfest to the metaverse Decentraland. The popular festival of hard rock and metal will feature more than 100 performers, including virtual performances by Ozzy Osbourne, Motorhead and Black Label Societa. The event is being called “the first metal and rock music festival to enter the metaverse” and it will be Ozzfest’s first performance since 2018.

The festival will begin on November 10 and will last for three days on its own land plot located in Decentraland. At Ozzfest, the metaverse will feature a “growing gothic castle” and the Ozzfest logo on its front. Anyone can visit the music festival, however, the owners of the Cruptobatz Ozzy NFT collection will receive “VIP access to viewing” and “free wearable devices”. Osborne presented a collection in December 2021, dedicated to the time when Osborne bit off the head of a bat on stage in 1982.

What is the Metaverse Music Festival in Decentraland?

For the second year in a row, the Metaverse Music Festival in Decentraland claims to be the biggest event. At the moment, headliners include Soulja Boi, Dillon Francis, Eddie Temple-Morris and, of course, the Prince of Darkness Ozzy Osbourne himself. MVMF is airing from November 10th to 13th with over 100 musical numbers already booked.

Set in an otherworldly cyberpunk landscape that nature is reclaiming, the festival will feature 15 unique stages featuring over 100 musical artists from a variety of genres, as well as new interactive experiences.Claims Decentraland about MVMF.

This year the festival opened its doors to all spectators – no VR helmets and no payment required. Ozzfest 2022 has partnered with Kraken to make the event possible on Decentraland.

We previously covered the announcement of the second music festival in Decentraland. 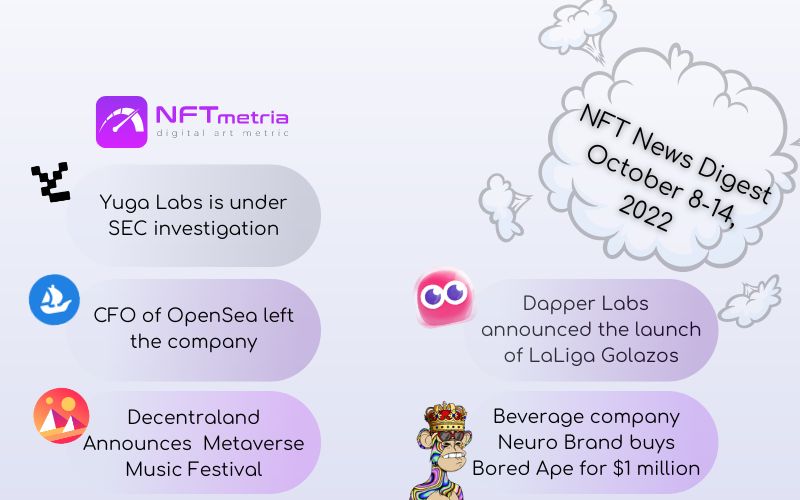 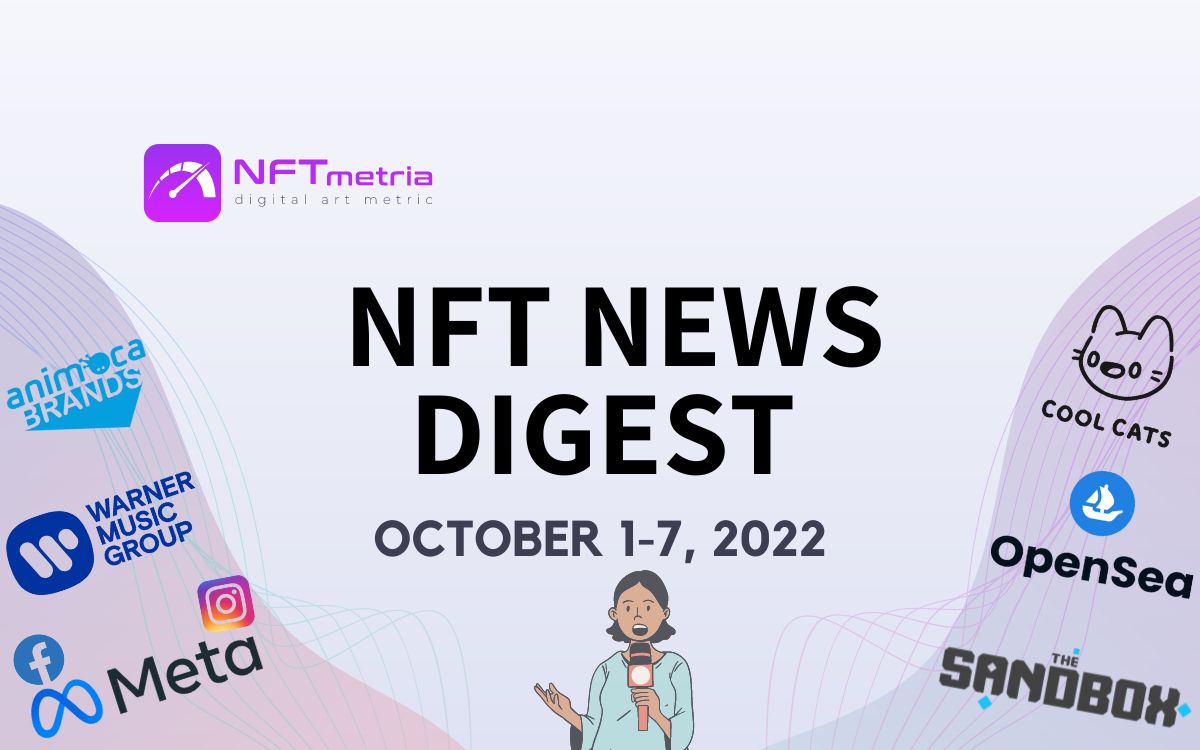