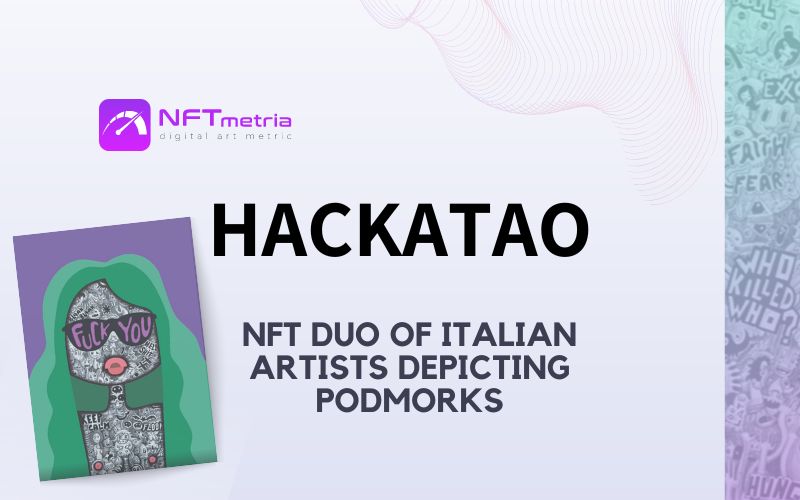 The NFT market has a large number of independent artists who each work in their own individual style. For example, Murat Pak works with geometry and abstraction, XCOPY works in an aggressive dark style, FEWOCiOUS tells about himself through bright surrealism.

But there are not only individual artists on the digital art market. We are talking about a duet in which the strength and talent of each of the partners complement each other. Today we will introduce you closer to the most interesting Italian duo Hackatao, which was formed by two artists Sergio Scalet and Nadia Squarci.

Hackatao is one of the most successful NFT projects in the world. Since 2018, the artists have sold more than $27 million worth of illustrations. The artists’ works were put up for sale at Sotheby’s and Christie’s auctions. The Hackatao illustrations provide a lot of room for thought. The art created by the duo often raises questions about the relationship of man with technology and the uniqueness of blockchain as a phenomenon.

The name of the group is formed from two particles:

The artists work quite privately, without publishing themselves or giving video interviews. So, they keep the mystery of the project.

Two creators, Sergio Scalet and Nadia Squarci, met and formed a creative union in Milan back in 2007. They were able to get their first commercial success by creating small pottery with soft and totemic shapes called Podmorks. In the design of Podmorks, even then, the Hackatao corporate style was clearly visible, which at the moment has managed to go to the masses.

Over the years, in 2012, Hackatao was inspired by the idea of ​​virtual animation of their ceramic characters and began to work in this direction. At that time, there was no single way to monetize it, so the guys did it with full enthusiasm.

Hackatao in the NFT world

The team is included in various lists of the most sought-after NFT artists and is one of the most financially successful players in the market. So far, Hackatao has created over 9,000 illustrations, with total sales exceeding 19K ETH (approximately $23 million at the moment).

The team recently announced an upcoming collaboration with The Sandbox metaverse, as well as regular collaborations with auction houses Sotheby’s and Christie’s.

The 300 @hackatao Queens+Kings avatars reserved for Sotheby’s have now been sold to 220 clients, around 85% of whom are traditional collectors taking their first steps into the world of NFTs. #HacktheRoyals pic.twitter.com/hmPE6jUoAK

As mentioned earlier, Hackatao literally stood at the origins of the field called NFT. And to realize their creative potential in the open spaces of the blockchain, acquaintance with the team of the SuperRare marketplace, which had not yet launched at that time, helped. The guys from this team liked the work and a few days later they launched a platform on which their first NFT Girl Next Door was exhibited.

In 2018, we first read about bitcoin, after that we began to search for more and more information about it on the Internet and came across an article by Jason Bailey, in which he considered the use of blockchain in art. Inspired by this, we contacted Jason, and he told us about the SuperRare marketplace, where we released our first visual work. It’s nice to be at the origins of something so great and among the founding fathers. According to the artists, this is how they got into the world of the NFT

The peculiarity of the stylistic work of Hackatao is the abundance and combination of various artistic styles and patterns. In addition, this team tends to supplement their work with a variety of philosophical overtones. They supplement it with various references to the acute social agendas of our time.

We like the idea that there is a single visual whole. If you can recognize our art by certain colors, it is nothing but power. I don’t see any repetition there; in fact, there was an evolution between the first creations and the recent ones. Nadia Squarci said

Artists believe that only thinking people who appear from generation to generation can read their thoughts in paintings, and they also consider blockchain supporters to be adherents of a new ideology.

The most famous NFT works of Hackatao

Hackatao are the authors of a magnificent collection of paintings that are now in great demand in the NFT investment market. But among them there are those works that have become iconic in their careers and brought fame.

Hackatao’s debut NFT work was Girl Next Door, written in 2018. It was it that the artists presented to the team of the SuperRare marketplace, which was preparing to launch in just a few days. And then the picture was among the first published works.

Despite the fact that the first sale brought the team only $ 200, subsequent resales for the painting offered hundreds of times more. Thus, one of the last copies was sold for 20 thousand dollars, thereby bringing the team its first fame in the field of NFT.

⚡️Girl Next Door⚡️
Our first ever minted artwork on @SuperRare_co , passes from @YessinSchiegg into @15_kaizer's collection for 38 ETH ($20,503). In two years, a higher performance than #Bitcoin 😜

Oueens+Kings is the largest NFT Hackatao collection, which is a separate metaverse with special ways to interact with fans, its own rank system and tasks. With this innovative NFT project, collectors can take on the role of creators.

The Queens + Kings project consists of a total of 7346 NFT avatars. Each NFT in the collection is algorithmically generated with different characteristics of different rarity. After the first generative mint, collectors can customize their avatars as each trait is interchangeable. This means that the collector has absolute creative freedom to assemble their avatar according to their personality and preferences.

This collection continues to bring a good profit to the team of authors every day in the form of royalties from secondary sales, while:

Weight of the World NFT Collection

The ability to create strong collaborations in the art market is sometimes the key to success for both parties. And so, it was with a collaboration with Jose Delbo, one of the most iconic artists in DC history and now one of the most popular NFT artists. The artist collaborated with Hackatao to release an NFT series dedicated to Wonder Woman.

Starting from the first days of March 2021, within 4 days they released almost a thousand NFTs, each pack of which contained seven illustrations. The most profitable picture was “Weight of the World”, for which on March 6, 2021, 149 ETH was paid (at that time 271 thousand dollars). In total, this collection has been able to generate more than 1.85 million dollars in profit for artists.

For Valentine’s Day, February 14, 2019, Italian artists have released another cyber-masterpiece to the public.

Recent resales of this work have been as high as 95 ETH ($150K) and the Italian duo have earned around $15k in royalties.

Where can you buy NFT work Hackatao?

You can start investing in NFT or buy work from Hackatao on many well-known trading platforms:

The Italian artists have attracted a huge following in the NFT community with their playful and colorfully illustrated characters that reference historical and pop cultural phenomena, all with some elements of the couple’s signature black and white line art.

Art is more important than profit. This is how the creative position of artists sounds globally and multifaceted.

Hackatao combines cultural quotations from the past into bold and cutting-edge forms, standing out as a pioneering representative of the contemporary art scene. 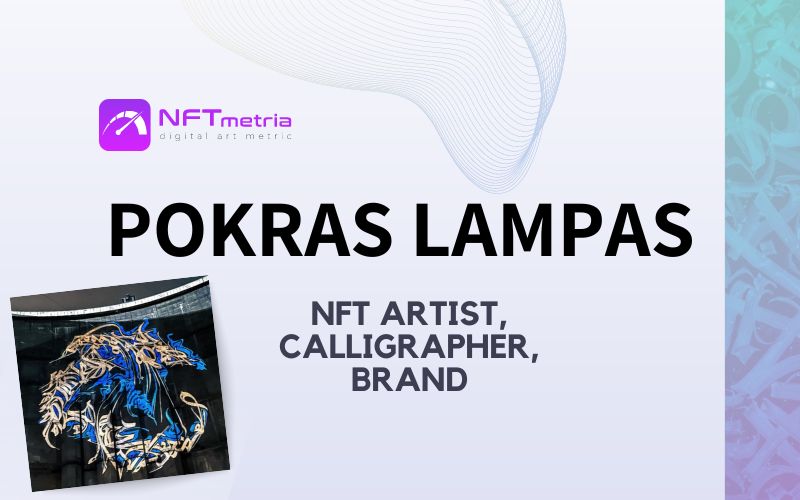 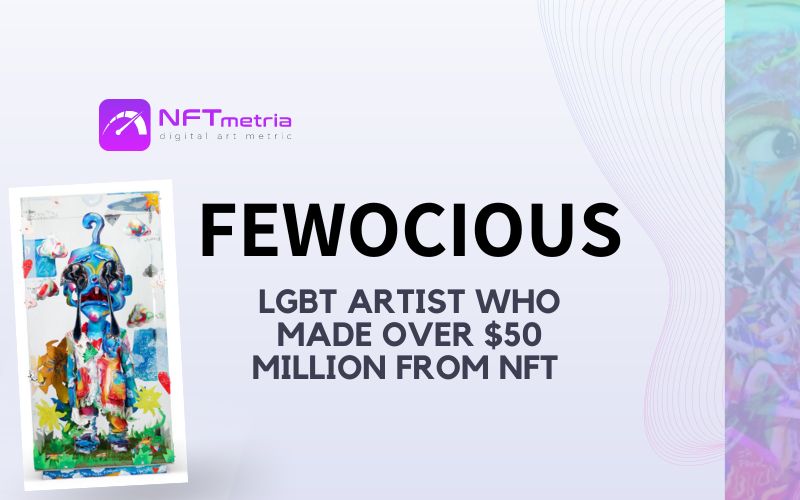 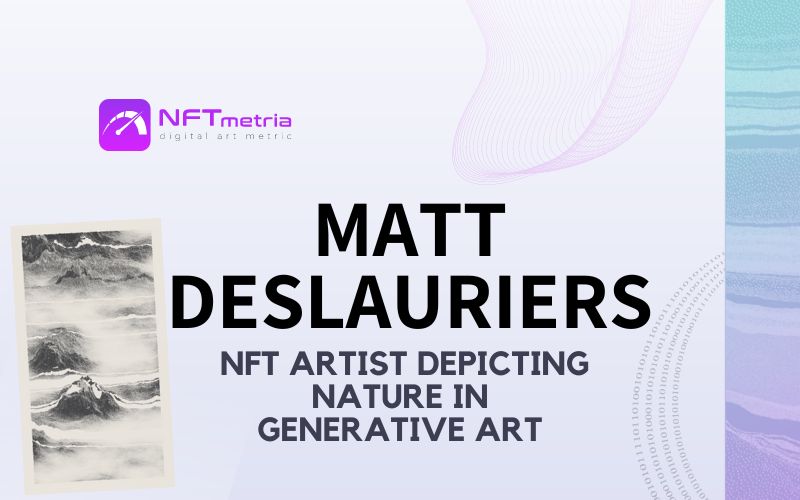