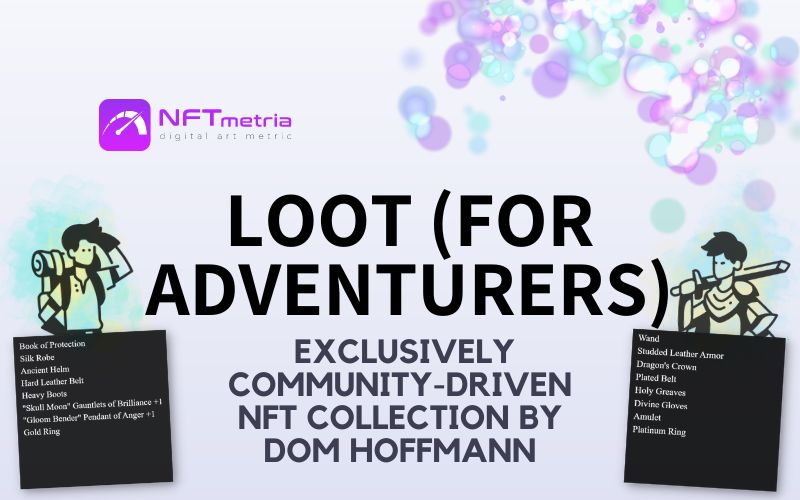 The rapid launch of Loot (for Adventurers) NFT on August 27, 2021 was like launching a spaceship. At the peak, which the project reached on September 3, the price of tokens soared from zero to $80,000 apiece.

A large-scale ecosystem has actively begun to be created around the startup. The volume of trading for each of the Loot derivatives exceeded 200 ETH, which was about $800,000 as of September 2021. And today, the volume of secondary sales for the main collection exceeds 75k ETH (more than $120 million), which makes it one of the most expensive NFT projects in history.

The secret of the frenzied excitement around the collection is easy to explain: NFT enthusiasts opened up a world completely free from management, which the community created and shaped on its own. So, thanks to the freedom of action and initiative of the community, today 3 separate Loot communities, more than 80 derivatives and 9 guilds have been created around the project.

What is Loot (for Adventurers)?

Loot (for Adventurers) is an NFT collection generated and launched on the Ethereum blockchain. It includes 8,000 unique digital objects. In appearance, they resemble playing cards, only instead of colorful images, you will see lists of words made in white on a black background.

Each list is a random combination of 8 items related to the equipment of a medieval knight: armor, weapons, symbols of magical power, etc. You may see “sacred helmet”, “studded leather gloves” and “dragon crown” among them. Images, options, and other NFT functionality are intentionally omitted.

Collectors can interpret, visualize and value their trophies however they please. There are no preset rules. A project participant can collect any equipment and go on adventures with it or create their own game project based on the original collection. This fundamentally changes the paradigm familiar to the NFT space.

Even Vitalik Buterin, one of the main personalities in the history of the blockchain, the creator of Ethereum, spoke about Loot.

I think the @lootproject philosophy has it right: pretty much anything that anyone creates "exists", what matters is to what extent other people build upon it.

Loot (for Adventurers) in numbers

Types of NFT Loot (for Adventurers)

There is a total of 7779 tokens in the Loot (for Adventurers) collection. And they are all divided into 8 main types, each of which has exactly 500 attributes:

Who founded Loot (for Adventurers)?

The author of the Loot (for Adventurers) project is 35-year-old New York entrepreneur and programmer Dom Hofmann @dhof. Prior to creating Loot, he was known as the co-founder of the short video sharing app Vine, as well as the founder of the video project Byte (V2) and the Peach messenger.

The designer and co-founder of the project is Lili Feyerabend, a developer of full-featured fintech products and a specialist in decentralized applications.

According to Hofmann, the Loot universe was born from a dream of a fantasy game that allows you to move from one imaginary reality to another. As it turned out, he was not alone in his dreams.

A short tweet from Dom about the launch of Loot (for Adventurers) was enough to make it a bombshell.

Tokens available to the crypto community – from #1 to #7777 – were sold out in less than 4 hours. The remaining ones were reserved by the author of the project.

It is noteworthy that the tokenization cost Loot-collectors nothing – they paid only the commission for the transaction. But the main feature was that Hofmann decided to entrust the fate of his NFT brainchild to collectors.

I am not project manager. I give directions when needed. Dom Hoffman’s confession

This decentralized approach has led to a surge of enthusiasm among NFT connoisseurs and an impressive branching of the Loot universe.

The peculiarity of this project is that within the framework of the project, users use NFT to create their own scenarios for the development of worlds created by themselves, which are combined with each other into a real metauniverse. And the player can be anyone and do anything in it.

Co-creation of the founder of the collection and the community is the main idea of Loot (for Adventurers). It prepared the basis for numerous versions of the original collection.

Each member of the community is free to supplement the Loot universe with their own characters, maps and tools. Derivative Loot products can be anything from games to art projects.

It is noteworthy that less than a week after the release of the collection, about 20 of its versions appeared. Today, several dozen Loot branches are indexed on platforms such as LootWatcher or Bibliotecha (for Adventurers).

Why is the Loot (for Adventurers) collection popular?

Loot is an unprecedented case in the NFT space. There is no team or company behind this project, it is not controlled or censored by anyone.

And initially the project received a boom and popularity thanks to the so-called “Dom effect”. The fact is that the author of Vine has already participated in the creation of several innovative NFT projects earlier (Blitmaps, Nouns DAO, Supdrive), which then became wildly popular among fans of this direction. Thanks to his reputation as an entrepreneur, Dom Hoffman attracted many fans of the above projects who immediately jumped at the opportunity to capitalize on the creative experiment. The result was the rapid growth of the Loot community.

Today, the success of Loot is the result of the creative decisions of the entire community which feels free from artistic canons and evaluation criteria. The decentralized nature of Loot (for Adventurers) results in its unlimited possibilities:

The active and creative Loot community is not going to stop there. Dom Hofmann previously shared his thoughts on the future of the project. According to him, three main questions need to be answered:

The main direction of work on Loot remains the same – the search for opportunities to expand and versify the project.

Let’s mention the most iconic branches of the collection:

How much does Loot (for Adventurers) cost?

In August 2021, at the time of project creation, the free minting was available. Future holders only had to pay for the gas. And then this case had the effect of an exploding bomb. Already on September 3, the price of tokens soared from zero to $80,000 apiece.

Most Expensive Sales of Loot (for Adventurers)

The most expensive sales are led by the following NFTs from the Loot (for Adventurers) collection:

Where to buy Loot (for Adventurers)?

Loot (for Adventurers) is currently only available on the OpenSea secondary market.

How to buy Loot (for Adventurers)?

Should you invest in Loot (for Adventurers)?

According to Dom Hofmann, even he cannot appreciate the usefulness of the NFTs he created. However, many perceive this project as an investment prospect with fantastic potential. It’s proved by the volume of secondary sales amounting to more than 120 million dollars.

There are compelling reasons to invest in Loot (for Adventurers):

Unlike the up-down strategy, where the value of the project is increased by the decisions of the project developers, Loot (for Adventurers) uses a down-up approach. Therefore, the benefit from the project directly depends on how the community interacts with it.

The Loot Universe harnesses the power of blockchain technology to enable the community to collectively build a multimedia empire of games, art, stories, valuable items and characters. With a global fan base working on projects together, Loot can outdo media giants like HBO or Disney.

Loot (for Adventurers) is not just a game and a community. This is a whole virtual universe in which users themselves decide what the world they have created will be like. That is why many believe that this project can be the starting point for creating a real, fully functional metaverse.

Overall, this is a phenomenal NFT project. It is distinguished by a fundamentally new approach to the use of collection tokens and almost unlimited possibilities. No wonder its participants are willing to pay thousands of dollars for the possession of fantasy swords and helmets in the form of a white list on a black background.

Also, one of the main advantages of the Loot-universe is its creative and friendly community. Everything here is subject to initiative and collective creativity. If you are a crypto wallet owner, fantasy fan, and DeFi addict, join Loot (for Adventurers) for an exciting and challenging NFT adventure. 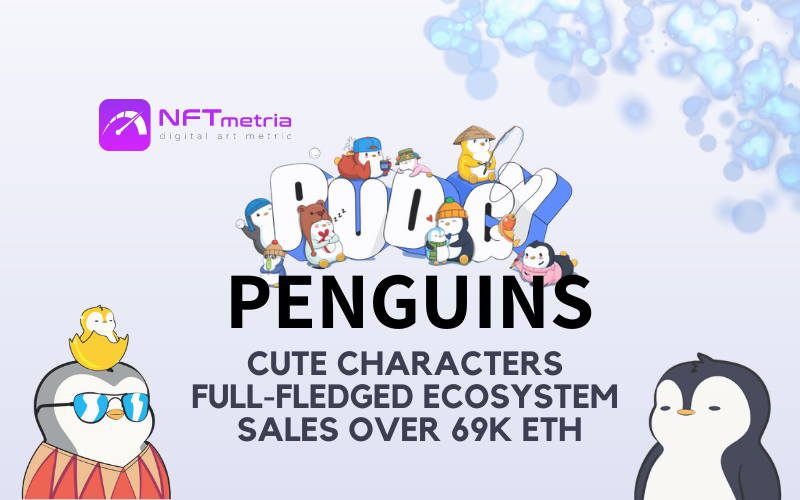 Pudgy Penguins: a source of joy and warmth with over $110 million in sales

VeeFriends: GaryVee collection with over $93 million in sales 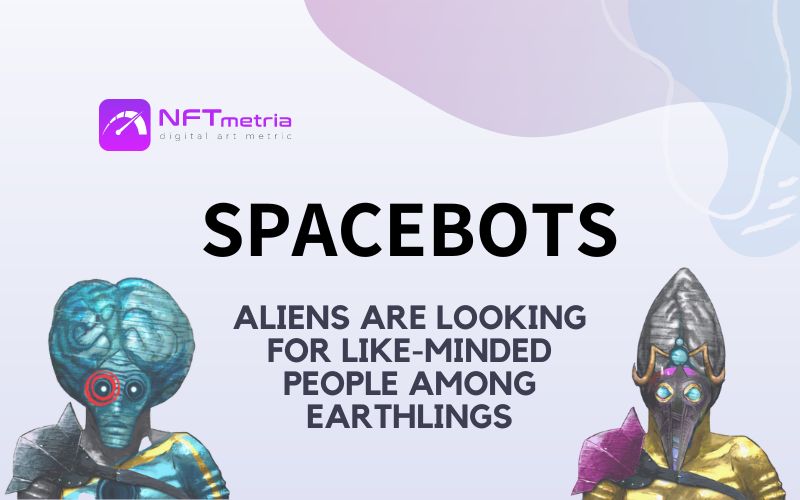 Spacebots: NFTs that pave the way for a strong future